Ann Glenesk has given a few talks on this subject around the diocese in 2011.  An updated version of the presentation she gave is available on-line now for you to view and perhaps use yourself.  If you would like Ann to give the presentation at your branch or other meeting, please contact her by emailing:  info@muingg.org.uk .

The presentation can be downloaded here (1.97MB).

Loving God, as we prepare to welcome our new neighbours at HMP Low Moss, help us to reach out and share your love with; prisoners, their family and friends and the prison staff.    Lord in your mercy, hear our prayer. Amen

This is the prayer said by MU members who are looking forward to helping at the new prison on the edge of Bishopbriggs.

The ethos at HMP Low Moss is to be professional with prisoners, but also welcoming to visitors and responsive to their needs.

Staff welcome input from the community to help create an encouraging environment, between the hours of 1-4pm and 6.30-8pm by:-

Preparation for roles will be undertaken by Families Outside and the Prison Staff.

Read the full article on the Bishopbriggs Branch web page by clicking here. 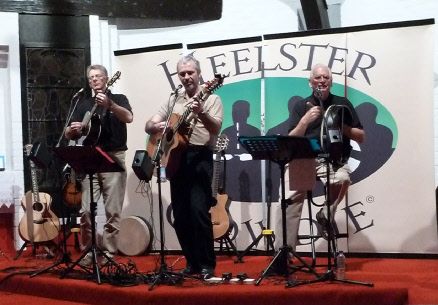 Russell, Vincent and David - Heelster Gowdie - old Scots for head over heels - treated members and their friends to a great night of well loved folk songs at St James the Less on Friday, 11th November 2011.     Thanks to Rev Shelley Marsh for giving permission for the concert to be held in St James.

The audience enjoyed the chat between the songs and were soon contributing to the melodic sounds!

The group generously, donated their time and talents to Mothers' Union.  The Overseas fund will be the recipient of the money raised - a fantastic £500!

The group sang the Jeely Piece song - thanks to their efforts families in Africa will not require to have pieces given to them, but will have the opportunity to develop skills to make their own bread!

Thank you Heelster Gowdie - we all had a great night and raised much needed funds. 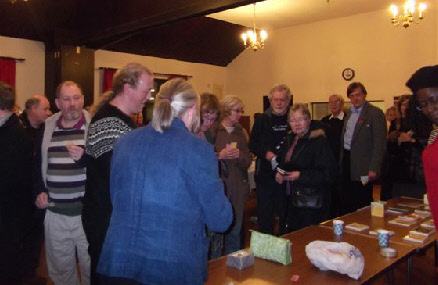 Further good news - David Brough of Heelster Gowdie is donating proceeds from his illustrated book for children 'The Elves of the Little Fawn' to Mothers' Union. David will be signing his book on Sunday 11th December at the David Marshall Lodge, Aberfoyle, FK8 3SX and at various other venues. 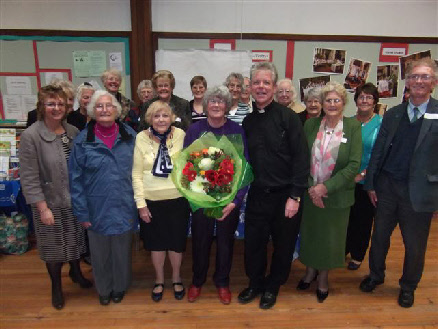 MU Enterprises announced that their top saleswoman in the UK is Margaret Horrell the MUE representative in Glasgow & Galloway!

The work undertaken by Margaret and the other MUE reps is vital as two thirds of revenue for Overseas Mission comes from the sales of MUE resources.

Margaret was presented with a bouquet of flowers by Rev Peter Douglas, the MU chaplain in St Mary's Cathedral, Glasgow. The photograph shows Margaret and some of the members of G&G who share in Margaret's success.

MU Enterprises resources can be purchased online at http://shop.muenterprises.co.uk 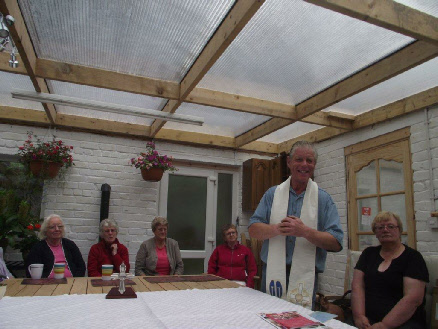 Mary Sumner's birthday, 9th August, was identified by the staff of Mary Sumner House as an opportunity for members to meet together, to be Faithful in Prayer.

Members of Glasgow & Galloway were invited to Rev Peter Douglas' plant house for worship and to enjoy the delights of a BBQ.   Due to the completion date of the plant house being delayed the gathering took place on August 30th.

The first Eucharist in the newly rebuilt plant house was a delight with all those present taking part in both silent and open prayers.   The rain which had been noisily beating against the roof, fell silent and the sun appeared during prayers! A wooden cross in memory of Peter's wife, Margaret, graced the wall and plants were in full bloom.

Peter's preparations which had prevented him getting any sleep the night before were greatly appreciated by all.    The turkeys and the rest of the food contributed by members were thoroughly enjoyed.   A feast, indeed!!  After thanks were offered to Peter and the saying of the Grace members left for home.

All this day, O Lord,

Let me touch as many lives as possible for thee;

And every life I touch, do thou by thy spirit quicken,

Whether through the word I speak,

The prayer I breathe,

Or the life I live. Amen 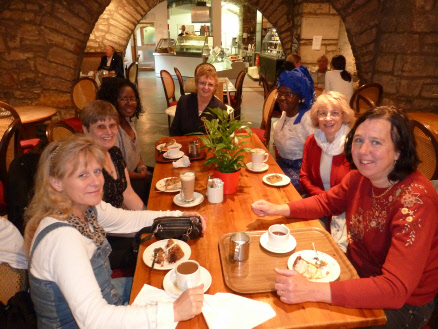 Members from MU Glasgow & Galloway were at St Mary's Cathedral on 8th June and at Mothers' Union General meeting at the Usher Hall on St Columba's Day, 9th June by their guests - Olu Akitoye from their link diocese of Lagos Mainland, Renata Andersson and Christina Bernerus from the Porvoo Link, the Church of Sweden.

Professor Tanya Byron the keynote speaker, focused on the joys and challenges of child rearing while Reg Bailey, the chief executive spoke frankly of the strengths and weaknesses of the government report on the Commercialisation and Sexualisation of Children, which he chaired.

Nicola Lawrence, head of Action and Outreach at Mary Sumner House reported on her visit to the Democratic Republic of Congo. The rape of women and girls continues - 48 are attacked every day.   Women return to their village pregnant or with a child. While husbands may reunite with their wives, the children are orphaned.    MU workers are involved in the counseling of mothers and in the support of orphans.

More information about The Empty Chair is available in pdf format by clicking here or in MS Word format here. 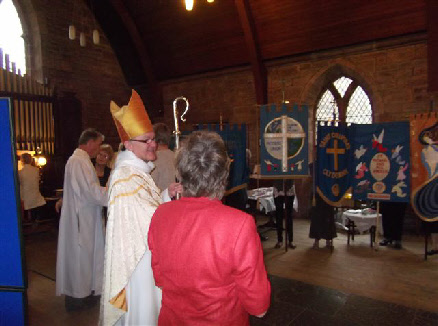 The people of Holy Cross, Knightswoold were the generous hosts for this year's Mothers' Union Festival Service.    Members travelled from around the diocese to participate in the worship on 21st May, which was led by Bishop Gregor and our chaplain Rev Peter Douglas.

The music was provided by Alan, the organist.  The focus of the Bishop's address was Hosea's assertion that God's compassion is greater than God's wrath.

Following worship the whole company including guests from the United Free Church, the Church of Scotland Guild, the Scottish Baptist Women's Fellowship and Hilary Moran, the Provincial President enjoyed lunch and fellowship.

Thanksgiving and Celebrations at Bearsden! 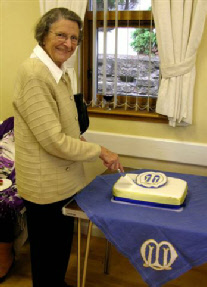 Thanksgivings were much in evidence as All Saints Bearsden branch of Mothers' Union enjoyed its 50th anniversary celebrations.   Friends old and new enjoyed an evening of reminiscing and fellowship on Saturday 7th of May 2011.

This was followed on Sunday 8th by a thanksgiving service led by Mike Graham and Fraser Gold.  Barbara Elliott, former Diocesan President, the first treasurer of the branch, reflected on the activities of the branch over the 50 year period.  Barbara, spoke warmly of the other founder members - Gwen Mawbey Enrolling Member, Joyce Young secretary and the support provided by Canon Bisset.    Branch members have left a legacy of faith in action with a strong emphasis on prayer.

The branch was officially closed with prayers of thanksgiving for the past, forgiveness and hope for the future.

After the service the congregation gathered in the hall for refreshments provided by the Vestry and a special 50th anniversary cake was cut by Barbara.

Ye Are My Witnesses 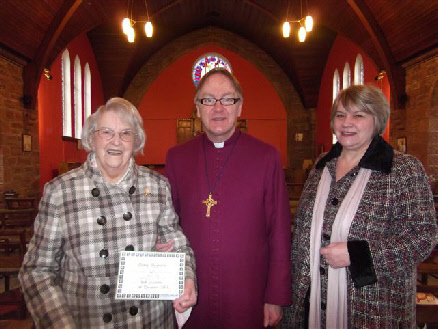 A Eucharist and Thanksgiving Service was held at Holy Cross Church, Knightswood, on Sunday 20th February 2011, led by Bishop Gregor and Rev Ivan Draper.  The thanksgiving was to mark the witness and commitment of Mary Reynolds who has served as a member of Mothers' Union for 51 years.

Mary recalled that all the joining services were held in the cathedral with each candidate required to recite the Promises.

Bishop Gregor read the Promises from Mary's joining certificate which had the heading Ye Are My Witnesses and had been signed by the Primus, John Halland How.  Bishop Gregor recalled his own ordination when he was advised that it is not the initial commissioning, but the continuous witness and commitment that matters.  Prayers were offered for Mary, the congregation of Holy Cross and Mothers' Union members.

Everyone present enjoyed the whole experience, which was enhanced by joyous music and fellowship.  Mary holding her new certificate is photographed with her daughter Kathryn and Bishop Gregor.

Click here to see more pictures from this event

Concern for the Victims of Prostitution

Glasgow has the highest number of prostitutes outside London and it is estimated that 50% of them are from overseas, which means they are likely to be trafficked women. Interested parties in the Scottish Episcopal Church and the Mother's Union believe that prostitution is a form of violence against women and a form of slavery by rent. In addition, women who are not trafficked into prostitution are hardly doing so by a free choice.

The statistics behind prostitution reveal that 75% of prostitutes started under the age of 18, 70% spent time in Care, 45% were sexually abused as children and 85% were physically abused as children. 75% of prostitutes have been raped or beaten by their pimps or by punters. Trafficked women are forced to serve up to 30 men a day and often are half-starved and regularly beaten to make them compliant.

In 1999 Sweden passed a law to criminalise the buying of sex. It was revolutionary in that, for the first time, the punter was brought into the public arena. It was highly successful. The numbers of women involved in prostitution and trafficking dropped significantly. Norway and Iceland soon followed suit.

In countries where legalising prostitution has been considered the answer to the 'problem' the results have been catastrophic. Germany, Holland and New Zealand have done so; the consequence has been that demand has risen and women and girls have been trafficked in to fill the gap. In New Zealand it is estimated that 80% of the prostitutes are trafficked women.

We support Glasgow city council's End Prostitution Now (EPN) campaign and Ms Godman's Private Members Bill to criminalise the purchase of sex as we firmly believe that this is in line with the Gospel teachings of love, justice, mercy and compassion. We are asking the dioceses to support this campaign and to ask local congregations to lobby their MSPs to vote for it when it comes before parliament.

I am very happy to answer queries or to give talks on this issue.

Interested parties of the Scottish Episcopal Church and the Mother's Union have recently submitted a response to the Consultation Document for the Proposed Criminalisation of the Purchase and Sale of Sex (Scotland ) Bill. The Bill can be found by clicking here and the full response can be sent to you by emailing Dr Jacci Stoyle .